Camp Lakewood Spends Another Day in the Old Testament. 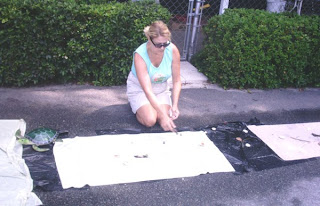 Our second day of Camp Lakewood flew by. Another camper, sixteen-year-old B, joined us. We began again with Worship music and prayer, this time actually taking praises and prayer requests from the kids. We talked about how God always answers prayer, sometimes with "yes", sometimes with "no" and sometimes with "wait".

Miss Marti came again today to tell us about how God's power broke thru some really strong barriers, the Jordan River and the Wall of Jericho. We reenacted both of these Bible stories in my driveway.

Marti created a riverbed out of plastic bags, towels, shells and some smooth stones with crosses carved in them, soaking it all down with water. Then, when the children first tried to cross, they felt the mist of the garden hose. When God’s Word was lifted up, the water subsided and they were able to cross. Everyone took turns picking up smooth stones until we had twelve, to build the monument on the other side of the river representing the twelve tribes of Israel. Afterward, each child got to take one of the cross-engraved stones home.

The Wall of Jericho was constructed out of shoeboxes. The kids found the base of the wall with their canes, then walked around it six times and blew imaginary trumpets and the wall tumbled down around
them.

After that, T’s great-grandfather, Jerry, had a surprise for the campers. He had brought T on his motorcycle, and two of the day-campers got their first motorcycle ride!

We prepared lunch, talking about how the events we had studied apply to our lives today.

After lunch, we played Uno and then we closed in prayer. We played three games of Uno, and each child happened to win a game. How cool is that!
Posted by Laurel Jean