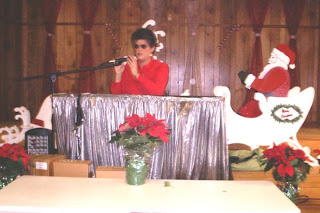 Here I am, setting up a microphone for the annual Christmas Party of the Association for the Blind, Charleston, SC. My thanks to Dixie Land Guide Dog Users, Inc., sponsors of Music By Laurel Jean for this event!

December 2009 was filled with Music and Ministry. The schedule began with an interactive Message in Music entitled “Getting Ready for a Birthday Party”, for God’s kids of all ages at Grace United Methodist Church. The following week found me in Summerville, SC, for a guest appearance on the local television program “Daughters of Charleston” hosted by Colette Harrington on WLCNTV Channel 18.

Traveling back to Charleston from the studio, I was called to assist in the delivery of twins. I checked my voice mail to find a message from a very frantic music director. She was calling from a local hospital, where her twin grandbabies were about to be delivered. She was unable to provide music for a church Christmas dinner that night, and needed to schedule me for an extreme last-minute booking! Healthy babies, Cooper and Claire came into the world just hours later.

On December 16, I boarded a plane to Greensboro, NC. There, Rev. Larry Patton, the station manager of Total Christian Television affiliate WLXI greeted me. Bright and early the next morning, I joined host Crystal Thornton, fellow guest musician Phyllis Heil, Rev. Patton and the rest of the production crew for prayer and a taping of “TCT Alive”, my debut on international Christian television! The program was first broadcast Christmas Day and has been aired at least twice since then. Stay tuned for video highlights from this program and others from 2009!

Back in South Carolina, I joined the Grace Church Family to celebrate Christmas Eve, with another Message In Music during the prelude of this blessed service. They even trusted me with a lighted candle!

When not in church, on the road or on TV, I kept busy helping some of “my” kids to celebrate the Season. I accompanied Shelby on her first independent Christmas shopping trip. We baked cookies and made homemade Christmas cards, drawing a picture using the Braillewriter. She even learned to wrap a present by herself! During Christmas break, Taylor and Brianna joined me for an afternoon of games, food and fellowship in the Celebration Center of Grace UMC. Thanks to all who assisted with this fun afternoon, including Brianna herself, who is proving to be a wonderful mentor for the younger blind teens and an inspiration to all of us!

Every Christmas needs a Christmas angel, and God never ceases to provide! My thanks, for the one who “out of the blue” brought a Romeo Braille Embosser to my doorstep in mid-December, at no cost to me or to anyone I know personally. This piece of equipment will allow me to better serve my brothers and sisters in the blindness community!

Already, I’m on the go and moving in 2010, a testimony to the prayers and financial sponsorship of folks like you! Watch my Events Page, follow me on Twitter, get my Newsletter and stay tuned to this Blog for updates.

Until next time, God bless you and keep His Song in your heart!