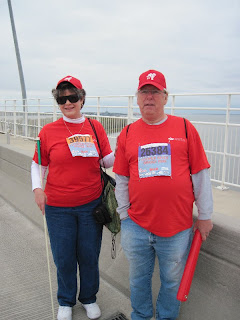 Here I am on the Cooper River Bridge in Charleston, SC, in this picture taken March 27. I’m pictured with Jerry Stebbins (the great-grandfather of Taylor, one of the kids in my Youth Chaplaincy) who has graciously served as my shadow during my participation in both the 2009 and 2010 Cooper River Bridge Run.

When I first walked the Cooper River Bridge in 2006 and was told about the annual 10K Cooper River Bridge Run/Walk, I knew that I wanted to enter this fantastic event. I love to walk, enjoy being outdoors, and really like being around other people. (There were lots of other people, to say the least! My bib number this year was 39577, and a lot more folks entered the race after I did.) My time from start to finish during this 10K event was two hours, thirteen minutes, and six seconds.

Jerry is a terrific shadow. He respects my independence as I travel with my long, white cane, but makes sure that I stay on the route. With so many people walking and running along with me, even “Miss Independence” needs a shadow!

In 2009, I walked the bridge on behalf of the Charleston Miracle League. This year, I walked to raise awareness for Dixie Land Guide Dog Users, carrying a banner across the starting and finish lines for this organization. The long, white cane has always been my mobility tool of choice, and I don’t see that changing any time soon. Still, I really appreciate the work of Dixie Land GDU, both for all of us in the blindness community, and for the community at large. It is an honor to work together with such a dynamic group of people and the pooches who guide them!

On a personal note, I believe that it is important for all of us in the blindness community to make a strong presence of participation within our surrounding communities, as we are able to do so. Music is a big part of my life and ministry. Just like anyone else, I have other hobbies and interests, too. Over the past couple of years, the Bridge Run has allowed me to minister in a unique way, and I’m already looking forward to 2011! Several of the area blind youth have even expressed an interest in joining me! It’s just another way of seeing and being God’s Light. Read Matthew 5:16 and think about joining us next year!

Until next time, God bless you, and keep His Song in your heart!