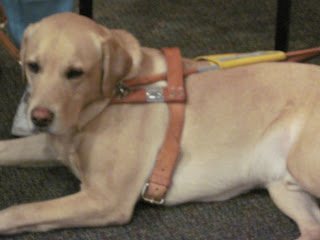 It's me again-Jesse! You all remember me, don't you? I'm Zack's little brother and my mom Audrey Gunter’s special, furry lap warmer. Although I've only had my new mom for a few months, we've really been lots and lots of places and done lots and lots of things. Folks always say how handsome and sweet I am. Mom just smiles, nods her head and tells them that I'm just as good as I look, too! Mom really loves me and I really, really love her too!

This week I've been taking Mom down to the Judicial Center on Broad Street, where we've been summoned for Jury Duty. Boy, were those guys ever surprised to see me there! I'm not sure exactly why, but they just couldn't understand that, even though Mom's eyes are broken, she can still do lots of things, especially with me guiding her! They act as though they really want to help her, but just don't know how. Instead of asking her, they grab her arm, shoulder or elbow. Sometimes a pair of "helpful Helens" will run up to us, each grabbing one of Mom's arms and begin pulling on her-most of the time in different directions.

"Hey, guys! That's my mom-not a wishbone! If she needs your help, she'll ask. Meanwhile, she has me and I can take her anywhere she needs to go, thank you very much!"

Today we returned to the Judicial Center in a Sheriff's car and there was a Deputy Sheriff waiting on us at the curb, thanks to Uncle Bill. When Mom told him how we'd toured North Charleston, West Ashley and James Island before our paratransit bus finally reached Broad Street, Uncle Bill fixed things. He said that we shouldn't have to depend on a bus to serve on a jury panel.

Anyway, things were a lot different today. We entered the building through that funny revolving door and nobody stopped us today. I guess they saw how good I worked yesterday and they figured I could handle things just fine.

The folks behind the security desk were kinder to Mom, too. Not one time did anyone pull on her arm or shoulder! They just patted their legs, like Mom told them, and off we went! I think they were competing against each other to see who could work with me!

"It's about time you guys got the message! You lead and I'll guide my mom. That's my job!"

We signed in when we reached the Jury Assembly Room and the ladies there were great! Each one of them bent across the table and watched as I led Mom to our chair.

"Can't talk now, girls! Got to be sure Mom gets to where she needs to be. Besides, can't you see the big sign on my harness? Sheeze! "

We sat in that room for a couple of hours and other folks were getting impatient. Not me, though! Oh, no! I had a nice carpet to lie down on and my mom's feet to use as a pillow.

One of the bailiffs came out and told us to take a 30 minute break. "Break from what? All we've been doing is sitting and talking! Let's get this show on the road, guys! Let's get moving!"

Mom and I remained there during the break and, after about an hour of more sitting, that same fellow announced that we should go to lunch!

"Lunch! Okay! I'm all for that!" Too bad Mom wasn't hungry, so we just stayed there in that big room.

A lot of others chose to remain there, too. The lady in front of us just couldn't help herself, and she began asking Mom about me. She seemed genuinely interested in how I was specially bred, born, raised and trained as a guide dog, and how much I help my mom. She was particularly moved when Mom told her about my big brother, Zack, and that he'd actually led her to God. Curious, she listened intently as Mom told her about meeting Aunt Mary Kay and how she'd prayed for and with Mom, back in 2002. Tears streamed down her face when Mom recalled Zack guiding her down the church aisle to the altar, where she accepted Jesus as her Savior. She laughed aloud when Mom told her the part about Pastor Bobby wanting Zack to jump into the Baptismal Pool because he'd never Baptized a dog before.

"Yep, that Zack is a character, alright! He may be laid back, but he really loves to swim and to eat! Boy, does he love to eat!"

As they talked, they discovered the nice lady went to school with Mom's niece, Wendy, and she knew a lot of folks Mom knows. The conversation really got interesting when Mom told her about Aunt Laurel's Christian Music Ministry, her outreach and Chaplaincy for Blind Youth. I could hear the love in her voice when Mom described each of the kids and how Aunt Laurel had improved their lives. She told them about how Aunt Laurel has improved their cane skills; taught them how they can live independently (like she does); how to use a computer and how she works to improve their Brailing skills. More importantly, Mom told her about how Aunt Laurel is so interested in their spiritual needs and about the accessible Vacation Bible School she hosted, where one of her "kids" accepted Jesus.

By this time, tears were streaming down the nice lady's face and another nice lady had joined us. The second woman was a little older and a lot quieter than the first; but her love for the Lord was loud, though! In no time. Mom and those other 2 ladies were holding church services right there in the Jury Assembly Room-laughing and trading stories and praising God! I just laid under Mom's chair and soaked it all in. I love to hear Mom talk about God and how He uses everyone if they'll only let Him.

Another bailiff came out and began calling names for people to report upstairs. Soon, we were following them into a tiny courtroom. Someone brought Mom a chair and sat it in the aisle so I'd have more room.

"Thank you, sir! I'd never have fit in that little bench over there!"

The judge began asking if anyone knew anyone involved in the case-the attorneys, witnesses or defendants He asked if anyone had any reasons as to why they felt they could not render a fair and impartial verdict if selected to serve on the jury. When he asked if anyone had any close relatives in law enforcement, Mom and I stood up, along with about a dozen other folks.

Each had to tell the court how they were related and what agency they worked in. Then, the bailiff began calling names and those folks had to get up, walk to the front of the room, turn around and face the prosecuting and defense attorneys, who would either accept or reject them for the jury. When I led Mom up, I heard one of the defense attorneys remind the other that Mom's brother was a Sheriff's Deputy. Of course, we were excused.

It took a while, but they finally filled all 12 of the jury seats and one alternate and we were told to go back downstairs to the Jury Assembly Room. I hadn't even gotten Mom back to her chair when they told her that her name had been selected again and that we'd be going right back upstairs.

"Okay! We get to keep moving! I'm too young for all this sitting and sleeping. Heck! If that's all they needed, Zack would have been great for this job!"

This time our wait was short, though. In no time, we were told that we could go for the day; but to call back the next day for further instructions for the rest of the week. As we exited the Jury Assembly Room and entered the elevator, a nice man came up to thank Mom for being such a positive inspiration to him. He said that it was refreshing to see someone of her caliber willing to serve, despite her disability. He added that it was even more inspiring when you consider that she could probably have been excused. When he asked why she hadn't tried, Mom just smiled and said, "I love this country and the rights that I enjoy every day. I believe that those rights come with responsibilities and that it is my duty to serve in anyway I can. Just my eyes are broken-not my brain. Besides, if I ever had to stand trial for anything, I'd like to have someone like me on my jury."

"Yep, I would too," he said respectfully.

When we got off the elevator, I didn't wait on anyone but guided Mom right out through the security gate and to the lobby of the Judicial Center. Uncle Bill walked up behind us and offered us a ride home.

Zack and Smokey were waiting on me in my front yard and Mom unleashed me so I could play with them. First, though, I just had to run and run and run!

Later Mom was talking with Aunt Laurel about our day's adventure. Aunt Laurel laughed and reminded Mom that we may have only thought we were there in that courthouse to serve on jury duty but that God may have had us there for another reason. They pray everyday for Him to put them where He needs them and, you know, I think Aunt Laurel may just have been right! I think that, at least for one day, the folks at the Charleston Judicial Center actually experienced "blind justice"!

Tomorrow we're going to celebrate! We've been excused for the rest of the week so we're going shopping!

"Oh, boy! Shopping! I love shopping with Mom! After a while of my working really, really hard, we have a "love-fest" and that makes everyone around us smile."

"Hey, Mom, can we get Smokey a new ball and Zack a new Frisbee? Maybe I could get a new chewy bone, too? I can't find my other ones. I think the other guys have hidden them from me."