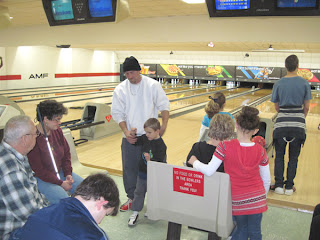 On a Saturday morning in February, friends and family of Dixie Land Guide Dog Users and Lowcountry blind youth gathered at AMF Lanes on Savannah Hwy., Charleston, SC, for the first of ten weeks of bowling! I was thrilled to join in support of this unique and wonderful outreach, introduced by Peggy Sudol, a sighted member of Dixie Land GDU and also an active team member of Dragon Boat Charleston. DBC enjoys bowling on their off-season and this year, the team voted to sponsor a league which would represent the blindness community. 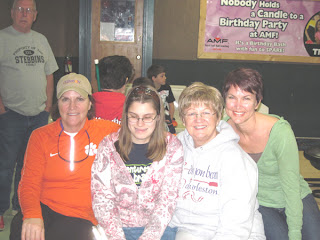 Here, Shelby (one of “my” kids) poses with DBC team members.

It was agreed that this league would be inclusive rather than exclusive. We encouraged blind participants young and old to bring sighted family members for an outing of fun and fellowship! Bowlers ranged in age from seven to seventy-five. Dragon Boat Charleston, AMF Lanes and Dixie Land GDU worked together to provide free games, ball and shoe rental for up to 15 people each week. The ten-week bowling outing began and ended with a pizza party, and as a special treat, DBC provided participants with complimentary custom-fitted bowling balls (and bags) for keeps! 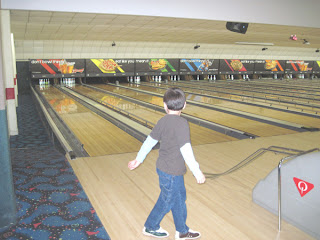 Our youngest bowlers were seven and eight years old. Eight-year-old Blaze (who is sighted) enjoyed perfecting his skills on the lanes. 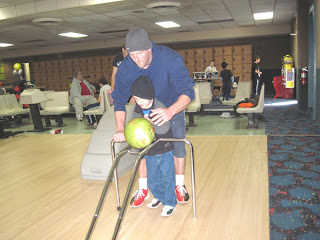 Meanwhile, seven-year-old Dalton’s dad, David, introduced his son to the game, made accessible to him by bumpers and a bowling ramp (the rail seen in front of him in the picture). 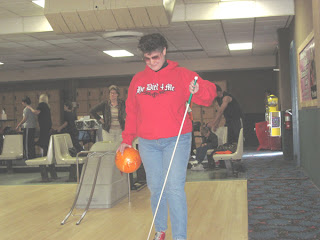 I love to bowl and had never been blessed with an opportunity to participate in a league until this year. What a joy and a gift it was for me to be able to share this special outing with so many of the brilliant young people who are part of my life! I used Slim (my long, white cane) to line up with the lane in front of me. Everyone cheered as they learned of my unique ability to score a gutter ball even with the bumpers up!

In February, I also joined with Dixie Land GDU, which hosted and sponsored a picnic at Charleston’s James Island County Park with food, fellowship and fun for all ages. Thanks again to Peter Smith and the Charleston Fliers who made this picnic day extra special with tandem bike rides for everyone!

This bowling outing and picnic were so successful that Dixie Land Guide Dog Users, Inc. recently announced its latest initiative, “Keeping Families Focused.” We know firsthand that blindness affects the entire family. The goal in creating this initiative is to offer more activities which include everyone and keep families focused on the core unit of the family, rather than the disability of just one member.

Thanks also to other sponsors, Retina Consultants of Charleston and The Association for the Blind of South Carolina, the first official outing under this initiative has already been scheduled, a very unique “hands-on” art exhibit and workshop.

I would personally like to thank the many churches (especially the Lakewood, IL United Methodist Church), the businesses and the individuals who support my Chaplaincy for Blind Youth by bringing my musical ministry to their communities. You help keep God’s Light shining for so many, and that outreach keeps growing and growing! Thank God and thank you!

Stay tuned for more posts like this one. Until next time, God bless you and keep His Song in your heart!